Posted on February 23, 2018 by marciahillart

Last summer I took photos of a local pasture: 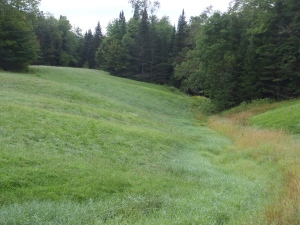 With the photos right next to one another, you can see that it’s two sides of the same pasture. That large clump of trees at the right of the left hand photo (that’s cut off by the edge of the image) is the same seen in its entirety in the center left of the right-hand photo. I took the photos a few days apart, and you can also see that the field has been hayed in the meantime.

I really loved the sculptural aspects of this landscape: the curving shape of the land, the sinuous lines of the grasses. Those lines are especially obvious in the image of the hayed field on the right, but you can see them in the left image as well. See the slightly bluer band of grasses snaking down from the tree clump to the foreground? The slanting lines of the brighter yellow-green coming from the left side?

I wanted to emphasize all that movement, and color seemed a good way to do it. Green-on-green is subtle. I was not interested in subtle!

I used black paper, wanting to let some of the black to give texture and depth to the grasses. I set up side-by-side easels so that I could work on both paintings at once. I thought that might make it easier to be sure the paintings were connected. I imagined two paintings that could each stand alone, but that would also work beautifully together. I worked on the lines of the pastures first, since they seemed the most important part of the paintings, and I wanted to get them right. But they were not right. The colors seemed a bit off to me, and the whole thing seemed too stripey. Ugh. Here is that stage:

Can these paintings be saved? Not as they were! I washed out the whole thing. Art Spectrum paper will take washing, at least up to a point. I might have overdone it! You retain a ghostly image, but that’s just fine if you are doing the same painting. I tried again. But the washing had damaged the paper a bit and the ghost image meant that I lost the texture that I wanted from the black paper. I overworked it in my efforts to get something I liked. I threw them both out.

Sometimes you have to admit defeat.

But the idea continued to call to me. I really wanted to make those paintings. After a break of a month or two, I tried again, this time doing one painting at a time, hoping that it would feel less daunting that way. Sometimes when I am stuck with a painting, I think my creative mind works on it while I am going about my life. Occasionally I have dreams offering solutions. Often, I just leave the painting up on the easel and look at it once in a while until the solution seems clear. But in this case I guess it was the passage of time and whatever mysterious thing happens in some subterranean way. It also helped that I tackled it during my painting retreat with my friend Cindy, so I could get moral and artistic support!

It worked. I finished the first painting, tackled the second, and was happy with both. Hooray! At long last! Here they are: 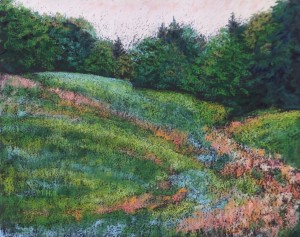 I love them! It’s exactly what I wanted. They are clearly twinned, but each is complete in itself. The colors are similar, but the balance of the colors are somewhat different in each. They have that texture of the black paper. They have movement, lots of movement. One thing I did was to remove the foreground grasses in the photos, which I realized were just a distraction. I omitted the pinks, which I liked but which complicated the palette too much. But mostly I gave it time. And mostly I didn’t give up.

5 Responses to Sometimes Art Fights Back!