The Seasonality of Painting

One of the pleasures of painting is that I can immerse myself in any season at any time. Longing for green in winter? No problem! Feeling a need for the hot colors of autumn? Easy!

But in general, I find that I tend to paint the season that I am experiencing. Sometimes there’s a lag, especially with winter, as I slowly let go of fall’s fiery display, but eventually I come to rest in the reality that is outside my window. Here are my two most recent paintings:

“Yellow House,” 11″ x 14″. This scene is deep into winter, but it has a certain warmth to it nonetheless, because of the color of the house and even the snowy near hillside. I used an olive green paper, which has a bit of warmth to it. You can see the paper showing through in those background trees, since I used small choppy strokes of pastel and allowed the paper to show through to give it texture. I like the effect. The subtle golds in the far trees and the road contrast with that cool blue-gray sky. The sky speaks of coming cold. The home and its setting speak of coziness. 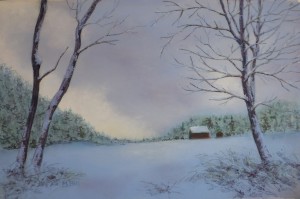 “Winter in Parentheses,” 12″ x 18″. On today’s weather report, the forecaster mentioned that this is the last day of winter’s historically coldest average temperatures, which start January 9th and slowly change as of January 30th. I must have felt that in my bones when I chose this image to paint. This is the depth of winter: the sweep of snow, the lowering clouds, the pale sun. But there is light here as well. The small structure is now in the distance, looking not cozy so much as protective. This is a portrait of winter’s power, and the force of the season is prominent. The paper underneath is black. It does not show anywhere, but I think it adds a depth and solidity to the scene.

I find it interesting that I usually paint the current season. Of course, I have much lived memory to bring to painting the images of any time of year. But there must be something about living it right now that helps to shape what I want to paint. Perhaps it is that every season, even the slushy mud of early spring’s “mud season” and the stark colors of late fall’s “stick season,” has its own visual message.

This entry was posted in Uncategorized. Bookmark the permalink.

5 Responses to The Seasonality of Painting